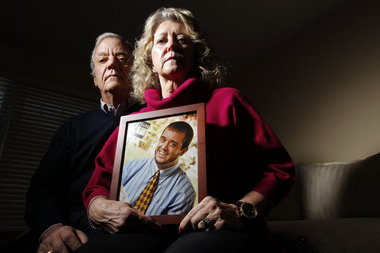 Denise Mariano and her son Michael had been at Princeton House since 9:30 in the morning. It was now after 5 p.m. and the doctors at the in-patient rehabilitation facility were still fighting with Mariano’s insurance company. Michael was going through withdrawal. Denise was desperate.The doctors, according to his mother, told Michael he’d have better luck with the insurance company if he had a dual diagnosis: a drug addict who was also mentally unstable.

Would he, they asked, be willing to say he was going to harm his mother or himself. If Michael was mentally unstable, they could admit him, Denise said. And his insurance would cover that.

Michael refused. The 18-year old from Roxbury was a drug addict using as many as 40 bags of heroin a day, but not a sociopath. And even though the doctors wanted to help it wasn’t up to them — not really.

It was the insurance company that had the final say.

Denise ended up paying thousands of dollars out of pocket to get her son a room for a few nights in 2011 before her insurance agreed to cover outpatient therapy.

RELATED COVERAGE:
• Heroin use among young in N.J. is up, and in more suburban areas

“It was just a disaster,” Denise said. “I’m lucky my son is alive.”

Princeton House would not comment on this specific case. Its policy prohibits doctors from asking patients to make false statements, but health care experts say scenes like this have become far too common as heroin use booms among New Jersey youth.
Many are middle-class, suburban families — too wealthy to qualify for state or federal subsidies and too poor to pay out of pocket if an insurance claim is denied.

Dozens of interviews with parents, addicts, doctors, social workers, psychologists and policy makers reveal many patients are ready to commit insurance fraud to be admitted to in-patient rehabilitation programs.

It is better, some doctors and nurses tell patients, to drop private insurance because Medicaid or state grants can be more generous. It is often beneficial, others say, to lie about how much heroin is used because the more used, the harder it is for an insurance company to deny coverage.

“This is scary as hell if you have an adolescent or an 18 to 22-year old,” said Frank Greenagel, a clinical social worker at Rutgers who specializes in addiction and recovery treatment. “Imagine you have finally gotten your kid to agree to go to inpatient therapy and after all the crap you’ve been through, you’re denied treatment.”

Insurance companies say they have good reasons for their practices.

A clinician might want to err on the side of more treatment, regardless of what it costs. The insurance company can’t pay for everything without the whole system collapsing.

Even critics acknowledge that insurance companies have to make a business decision.

“What they are doing is making a cost benefit analysis,” said Stuart Gitlow, president of the American Society of Addiction Medicine. “My assumption is they are making a business decision.”

“Each insurer does it a little differently but they have to make some rules about what they consider proven, effective, or treatable with a lower cost alternative,” DeLia said. “Some are better than others but the process can be very frustrating for doctors and patients.”

And for advocates who decry what they see as insurance companies shortchanging the most vulnerable without ever having seen or spoken to the patient.

“They are practicing medicine without a license,” said Louis Baxter, director of the American Board of Addiction Medicine, an independent board that certifies addiction medicine physicians.

About 30 percent of the 33,000 heroin addicts who checked themselves into a New Jersey rehab facility are under 26 years old. These are middle-class kids, many of whom attended college. They don’t peddle wares on street corners or shoot up in alleys. They hide heroin in their parents’ suburban homes and use Facebook to connect to dealers.

“These are hard working families, upstanding citizens dealing with nightmare of addition, and their kids are dying,” Greenagel said.

Alice Silverman of Maple Shade is a licensed insurance agent, but in 2006, when she tried to help her 19-year old son Danny, she was met with one frustration after another.

“The hell I went through getting him treatment was ridiculous,” she said.

Silverman had taken her son to Kennedy Memorial Hospital in Cherry Hill, which had a detox center. Her son, she said, told the staff that he was using two or three bags of heroin a day.

A nurse pulled Alice aside. That wasn’t going to be enough to get him a bed, she whispered, according to Alice. He needed to say he was doing eight or nine bags a day, or that he was suicidal.

Kennedy Hospital has since closed its detox center and could not comment on Silverman, but Alice says she remembers that conversation.

Two or three bags weren’t enough for a bed, but it only took one bag end her son’s life.

“The system is broken,” Greenagel said. “People in the public have every right to be outraged.

Insurance companies do not discuss specific patients but did provide general statements on how they cover those who need rehabilitation.

UnitedHealth, for example, “determines coverage based on evidence-based guidelines,” according to Mary McElrath-Jones, a spokeswoman. That includes the Substance Abuse and Mental Health Services Administration, American Child Academy of Child and Adolescent Psychiatry and the American Society of Addiction Medicine.

Horizon Blue Cross “follows evidence-based clinical protocols for substance abuse treatment prescribed by the American Society of Addiction Medicine,” according to Thomas Vincz, a spokesman for that company.

There are conflicts because what the guidelines mean is often up for debate.

“Certain aspects of the criteria require subjective interpretation,” wrote Paul Earley, a physician who sits on ASAM’s board. “In this regard, the assessment and treatment of substance-related disorders is no different from biomedical or psychiatric conditions in which diagnosis or assessment and treatment is a mix of objectively measured criteria and experientially based professional judgments.”

But, often, an insurance company’s “professional judgement” will lead them to a different conclusion.

The ASAM criteria say, “for both clinical and financial reasons, the preferred level of care is the least intensive level that meets treatment objectives, while providing safety and security for the patient.” That gives insurance companies good ground to stand on when objecting to a clinician’s recommendation.

The Star-Ledger recently reported the number of New Jerseyans between the ages of 18 and 25 admitted to addiction treatment centers for heroin rose by more than 12 percent between 2010 and 2011, the last year for which data is available.

“State numbers don’t even capture how bad the problem is,” Greenagel said, because so many addicts try out of state treatment facilities, or are too poor to ever bother seeking treatment.

Most insurance companies will pay to detox a patient, but the ongoing care, the kind that can take months or years, is often seen as a luxury, not a medical necessity, Baxter said.
And, in his view, that is plain wrong.

“We have evidence it is a chronic disease just like diabetes,” he said. “When someone has diabetes, we don’t say, ‘See you later. Have a sugar free life.’ The care is ongoing.”

Struggles for appropriate care do not only affect addicts. When private insurance companies don’t pay, it is often taxpayers who pick up the tab – either through emergency room visits, or the criminal justice system.

Studies from UCLA, the National Institute on Drug Abuse and others show for every $1 spent on treatment, $7 is saved from the criminal justice and health care system.

“Even if you feel these are people who are morally bankrupt or brought this on themselves,” Greenagel said, “if we don’t pay for it now, we pay for it later.”

There are no numbers or studies that show insurance companies limiting coverage to deserving customers. No chart or graph tells this story. It is told through stories of addicts falling through the ever widening cracks of a crumbling system.

Back in his Little Egg Harbor home, Buchta, then 19, continued using heroin. He was in and out of out-patient programs, some court ordered, some paid for out of pocket. He held and lost jobs. The cycle continued until his death by overdose last July.

“The progression can happen so rapidly,” Sheila said.

“Absolutely no one would help.”Baxter co-wrote a paper last year with Alan Stevens, a behavioral health specialist, analyzing addiction treatment, and found stories like Buchta’s are far from unique.

“Continued misguided denial of access to the appropriate levels of care … is not cost effective or clinically prudent,” the doctors argued.

Kathleen Foster said she regularly meets with addicts, or parents of addicts, whose private insurance won’t foot the bill for what a doctor has recommended.

“That decision is not always made here,” said Foster, who founded Parent-To-Parent, a group in Trenton that helps families find appropriate detox and rehab centers after her son Christian died in 1998 from a heroin overdose,

Linda Chapman, director of addiction services at Trinitas Regional Medical Center in Elizabeth, said they “fight the insurance company,” but if it does not pay, the family receives a bill.

“Of course you’re frantic to get him somewhere before he dies,” said Jennifer Kaupp, of Mendham.

She and her husband spent about $100,000 paying for treatment for their son Jack, who was in and out of several in-patient rehab facilities, including Summit Oaks where his insurance company paid for fewer days than the doctors requested.

Early last year, Jack’s friend received six months in rehab for free because it was court ordered. Jack called the same facility to try and get admitted.

“We knew it would be a struggle because he wasn’t in enough trouble,” Kaupp said.

Two days after making that phone call, Jennifer and her husband found their son dead in a Morris Plains hotel room with a needle sticking out of his arm.

“It’s a visual that we will never, never get over,” she said.