Sports Recovery Coach: Johnny Manziel supported in an open letter by someone who has been there.

Sports Recovery Coach: Johnny Manziel supported in an open letter by someone who has been there. As An Addictions Coach, I deal with the ugly side of addiction and it is refreshing to see a comedian give him the support and confidence to get through all the negative press. The Addictions Coach and Cali Estes and her team are here to support all sports professionals and others that need sober coaching, sober companions and recovery coach support. 1.800.706.0318 www.theaddictionscoach.com
An open letter to Johnny Manziel 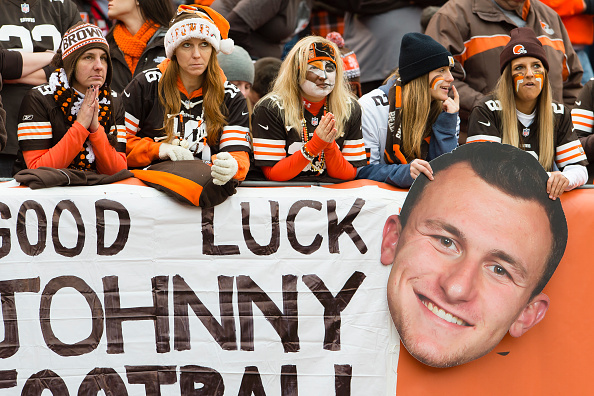 Being a fan-favorite like Johnny Manziel isn’t all it’s cracked up to be according to comedian Chad Zumock. Photo by Jason Miller/Getty Image

Hey there, Johnny Football. My name is Chad Zumock. I am comedian from Cleveland who travels the country telling jokes to complete strangers while having said strangers judge me in return. It’s a pretty cool gig, but putting yourself out there with something you love to do can be tough times. I also used to be a fairly popular radio personality in this town, but we’ll get to that in a second.

I wanted to write you as Browns fan but more as someone with complete empathy for you and your situation. I have empathy because we actually have a lot in common and because of that, I wanted to reach out to you and discuss your mature decision to seek much-needed treatment.

First of all, no one can deny your talent. Anyone that can make it to the NFL and be a first round draft selection when they’re supposed to be a junior in college is remarkable in and of itself. You have a Heisman Trophy and you were ridiculously fun to watch each and every Saturday. Because of this you came into the league with a lot of hype. Not just because you were a great college player, but because you had built a nice reputation for being a social figure in the public eye. I know what it’s like to build a reputation for yourself not for your hard work and talent, but for your extracurricular activities off of the field — or, in my case, stage. It wasn’t all that long ago when I was going out every night, doing up the velvet ropes and VIP sections, drinking, taking pictures with everyone… In fact, you should check out my Facebook from two years ago. Half the pictures I’m tagged in I don’t even remember them being taken.

No one can deny that’s a fun life to live and it can be very exciting. Everyone wants to be your friend. Guys want to hug you in hotel lobbies and girls want to go home with you just because of what you do and who you hang out with. It’s too easy to get lost and caught up in the moment. I lived it. I didn’t necessarily pop bottles with Drake or LeBron or even J. Cole, but things really got away from me and I forgot who I was. Not only did I forget who I was, people start assuming they know you because how you carry yourself publicly. What you put out there, people will really draw a conclusion of you and it instantly becomes who you are.

Because of this, people will try to hurt you at any chance you get. The superficial side of life and being in the public eye seems to give people a free license to unload whatever ******** agendas they have on you. A lot of its jealousy fueled by their own anger — people believing you don’t deserve what you have. My situation similar to yours was on a much, much smaller scale but working in radio in Cleveland. I can somewhat relate to some of the nonsense you have to deal with in town. All of those people filling up your Instagram comments and Twitter replies with names like “punk” and “douche” and “gay”, I’ve heard the same thing about myself a half-million times over the course of three-plus years. There’s nothing like walking through a grocery store making eye contact with someone and nodding your head to say hello only for him to yell, “DOUCHE BAG!” from the distance when you already passed him. Isn’t that fun? Just going to grocery store to get bread and paper towels so you can live and some random guy you never met decides this is his time to spew his hate for you? Isn’t that what everyone wants when they head out to Giant Eagle — though you probably can afford Whole Foods.

The people you are running with, keep an eye on them. These people really like hanging with Johnny Football because Johnny is the man in the world of emptiness. They brag about it to their friends and might even take the liberty to embellish the story for their own personal gain — just think of the guy who took that money phone video a few years ago and waited until this summer to post it for the world to see. It doesn’t matter how it makes you look in the end, it’s about them and their own personal gain. It’s cool to hang out with celebrities because for some reason it elevates their stature in the public eye. That what’s funny about life: People will judge you differently because of who you hang out with. With that being said, you have quite the stable of celebrity friends. Your boys Drake and Beibs seem to be pretty popular with the kids these days, and that right there just elevates your status. I can’t say that I’m jealous that your famous friends are a little bit more famous than mine, but I do have Chuck D’s number stored in my phone and Chuck D is just way cooler –in my opinion, of course.

I guess I’m missing my point? Hanging with these people doesn’t make you cooler. In fact, that will all go away when you make that one misstep everyone is dying for you to make. I really enjoyed my former-profession at times while in the Cleveland area because that’s all I ever wanted to do. I wanted to do stand-up from home and broadcast on the legendary Cleveland radio station WMMS for the rest of my life. That was my Plan A and Plan B. Unfortunately, much like you, I got caught up with an image and reputation I couldn’t shake. I brought a lot of it on myself at times, but the general public didn’t see my work ethic and passion for what I did on the other end. The hours I put in writing and producing bits, jokes and memorable moments that eventually elevate my other status into the Cleveland public eye. The life we are living will sometimes make us feel like a man alone. Nobody wants to report or talk about the times you staying in watching a movie on Netflix while eating a pizza (Angelos of course). They want to just think you’re the drunk guy on an inflatable swan in a pool drinking a bottle of Grey Goose. (One a side note: I’ve done that, but it was a plastic raft in a pool in Willoughby, Ohio.)

The point to everything I am writing: I know there’s a side of Johnny Manziel no one sees and as soon as something goes wrong, you will never be judged for that side again. As soon as something goes wrong you will see “so-called” friends and teammates leave your side and people will begin distancing themselves from you. You will see the opportunists turn their back on you, ironically during a time when you need them the most. You will see your famous friends lose your number. If you felt like a man alone before, you will really feel like a man alone after you fall.

People are waiting for you to fail and some of those people cannot wait to kick you when you’re down. You did something I wish I would have did that before I fell, and that’s seek help you need before it’s too late. It’s not too late for you and seeking treatment is the coolest thing you could do for the situation you’re in. Let all the hangers-on, haters, and awful media members fall to the side why you refocus on what got you here: Working hard and doing something you love. Not being on the front page of TMZ or courtside at the Cavs game isn’t all that bad. Go rediscover the true meanings in friendship and appreciation for the little things in life. I know you don’t know me from anything but I’m rooting for you off the field just as much as I am when you’re on it.

See you on the other side,